Is the mouse behaving in a laggy, choppy or sluggish way? Here are some things to try.

Ethernet is the Simplest Solution

The most common cause is from using a laggy WiFi connection, and you can often tell if this is the case with a simple ping test. If your Ethernet network is in another room, or you don't have one, then you could setup an Ethernet network. If your computers don't have Ethernet ports, you may need to purchase a USB Ethernet adapter.

There are currently no known issues in Synergy or the Windows and Linux operating systems that could cause mouse lag. Some WiFi networks do generally struggle with latency, so always try switching to Ethernet first to rule out that cause. Other than network issues, general system CPU and memory problems can cause the mouse cursor to lag.

On macOS, your WiFi adapter can sometimes lag randomly. This is also known as a "ping spike" (named after the `ping` tool). This WiFi lag could affect your Synergy experience, causing mouse lag where the mouse cursor movement appears delayed or choppy. When this happens, the mouse cursor feels as if it's jumping or stuttering around, rather than being a smooth experience. Generally, mouse lag happens on macOS where the mouse and keyboard is sharing to your Mac, rather than this being your main computer (the one that your keyboard and mouse are connected to). You can tell if a machine is a sharing its keyboard and mouse by looking for the computer with the white dot on it within the Synergy config app. Some tools such as WiFriedX have been created to disable AWDL and AirDrop, which some people suspect causes this issue.

What causes lag on macOS?

The mouse lag problem is caused by a long-standing underlying macOS issue which causes the WiFi hardware to temporarily slow down under certain conditions, such as having the WiFi menu bar open. As far as we know, Apple has not announced plans to fix this issue. This doesn't just affect Synergy, all applications requiring network access are impacted, including games and Apple's own utilities that ship with macOS. Indeed, one of the best ways to see the slowdown is to use the Network Utility app (included with macOS) and look for a "ping spike", a condition where communication between computers slows down.

Sadly we're fairly limited since it's caused by the way other applications interact with the WiFi adapter. We have opened a dialog with Apple Developer Relations about this issue, which has thankfully been fielded by Quinn “The Eskimo!” (Developer Technical Support, Core OS/Hardware at Apple) and we're working with them to try to solve the problem.

"While it’s on that temporary channel, the STA can’t be on the channel it’s using to communicating with the AP, and thus you see spikes in latency." -- Quinn “The Eskimo!” (Developer Technical Support, Core OS/Hardware at Apple)

How can I see a ping spike?

Ping is a utility for checking communication between computers is operational; essentially an "are you there?" message between computers. As part of the ping process, the time taken for the remote computer to respond is measured.

To perform a ping open the Network Utility from Applications > Utilities. Click on the Ping tab and you should be presented with the following: 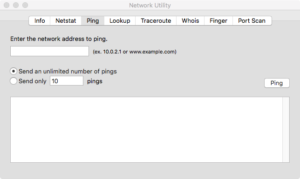 In the text box for the network address enter the name of another computer on your network and then press the Ping button. You will then see a number of lines that will look something like this:

The last number is the measured time taken for the remote computer to respond to the ping request. Typically on a local network, these numbers will be in the single-digit range, such as the 1.324 ms from above.

Now, run the ping process and open the WiFi menu bar menu. You should see results like: 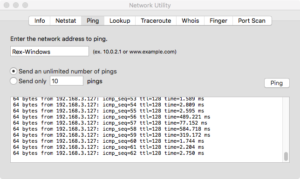 Notice that the ping times are now in the 100s of milliseconds, for example, 489.221 ms. This is the delay caused by the macOS issue and impacts the performance of Synergy. Response times in the hundreds of milliseconds mean that the cursor will feel as if it's lagging.

What apps cause this?

Many macOS apps cause the WiFi adapter to be queried, so either opening or just generally using apps like Chrome and Safari almost always trigger a ping spike. Obviously, not using these apps is out of the question, but knowing what can cause a ping spike may help with frustration.

Is there anything I can do?

Yes, but it's not ideal. The good news is that it's probably not your WiFi access point causing the issue, and it's most likely the problem described above (an issue with your WiFi adapter). The bad news is that it's an issue that Apple hasn't been fixed yet. It not only affects Synergy users, but gamers too. Closing apps one by one may help you identify which app is causing the ping spike, but since you probably need those apps, this won't be much help in the long term.

We found that this issue only occurs on WiFi connections and not wired Ethernet connections, so if you can use Ethernet (such as the one that's built into a Mac Mini, Mac Pro or iMac) you should not experience the issue.

If your machine does not have an Ethernet port, we recommend that you purchase an Ethernet adapter such as Apple's USB Ethernet Adapter to work around the issue. We truly appreciate that a hardware solution may not be ideal, and WiFi is certainly more convenient than Ethernet (especially for a laptop).

Thanks for your patience while we try to work with Apple to solve ping spikes on macOS.

Article is closed for comments.